You Want a Lower Handlebar Bag?

So Why Not Install Two Stems? 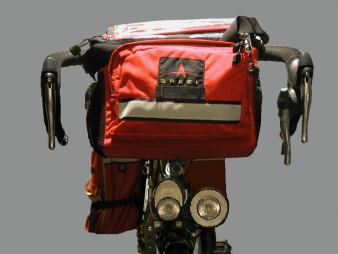 The front end of our tandem. One of the advantages of having a tall bicycle is that one may install headlights on the fork crown, a handlebar bag and still keep one’s hand above it all.
And by the way, it would be possible to install a headlight on the handlebar...

Back in the 1980s, I have used a handlebar bag that was attached to the handlebars with a rigid steel wire. It was a pain to install, it wasn’t the most stable contraption, but I really enjoyed the fact it was sitting below my handlebar. Twenty years later, the bag is way beyond its prime, so I replace it with a large Arkel handlebar bag. Great bag, very stable; it has all that I want... except it sits way too high above the handlebars.

It would be great it I could only find a way to install the handlebar bag lower than it is...

So why not two stems ?

It was very easy to do on the tandem, as it is equipped with a threadless headset (1 1/8" dia.), like most bicycles produced since the turn of the century. Since I had about 60 mm of spacers, it was fairly easy to replace some of them by a second headset. So here is how I install the handlebar bag.

How is it done? 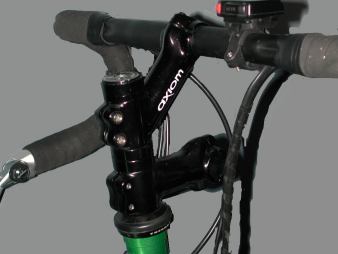 1.  The tandem has a threadless headset, so it is fairly easy to play with stems and spacers. In its “city” configuration, one finds, from bottom to top, a 90-mm 5° stem pointing down, then two 10-mm spacers, then a 90-mm 45° stem pointing up.
Note that the lower stem has replaced 40 mm of spacers. 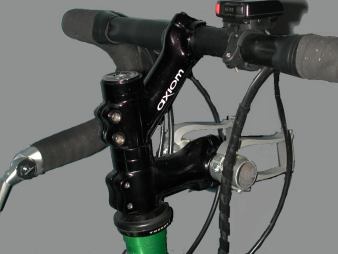 2.  When I want to use the handlebar bag, I remove the faceplace of the lower stem, then install a short section of aluminium tubing (100 mm x 25 mm dia.) onto which I have already attached the two brackets that hold the handlebar bag.

The supplied brackets tended to rotate easily with potholes, so I epoxied them in place. 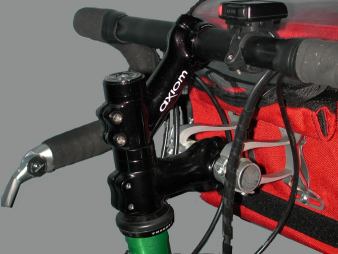 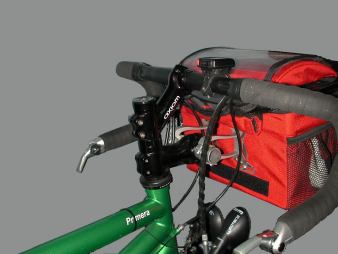 But what about a threaded headset?

Adapting that solution to my touring bike was a bit more challenging, as it uses a threaded headset. My handlebars are level with the saddle, and the saddle is rather high... which means I have a long, straight section of stem exposed. 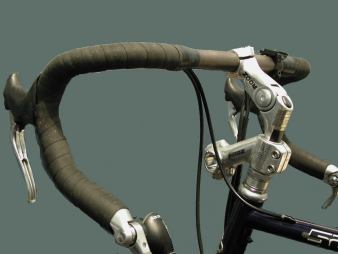 1.  The main stem is a Zoom adjustable stem, with about 100 mm of straight section exposed (and there still is about 70 mm inside). This means I have roughly 60 mm of straight 0.75" vertical tubing onto which I could install a second stem.

There is a catch, alas. Threadless stems seem to be available for 1" and 1 1/8" steerers, and threadless stems for 1" steerers are an endangered species around here. Especially in silver. 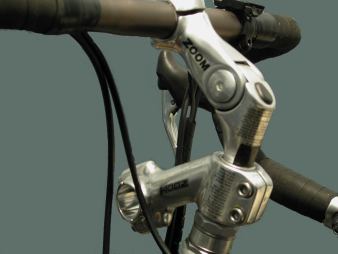